If there is such a thing like reading too much, that’s most likely what eventually made sailing my way of life. Reading about Magellan, Columbus, De Gama, etc. in a small Eastern Block country quite naturally lead me to the local nautical club and got me into rowing and sailing as a kid on the Danube river, going through Optimiasts, Cadets, CombiBoats, Zephyrs, Finns, and windsurfing between the mid-70s and late 80s. Celestial navigation became an obsession around the age of 14 and using a pan of oil as an artificial horizon on the balcony used to cause some raised eyebrows on my parents’ part but it was the only way to practice while living away from the sea. As a student in the River Navigation Technical High School in Rousse, Bulgaria, 4 of us – close-minded friends (all aged 17 at the time) – built a wooden cutter and did a couple of (quite insane in hindsight) winter trips up and down the Danube.

After applying to, and graduating from the Naval Academy – The Merchant Marine Navigational Department was then the only natural way forward. The five years of hard study and military discipline combined with training voyages, sports and sailing on a Quarter-tonner entirely crewed by cadets, were great schooling for a lifetime of yachting. In 1989, we took part in the Quarter-ton Cup in Falmouth, UK. A year earlier, aboard the one-tonner BulconStar, we set a record time crossing the Black Sea – funny it remained unbeaten for 31 years until November 2019 when my crew and I aboard my present boat managed to do the trip from Sochi to Varna considerably faster.

After sailing off (having emigration in mind) to the unknown on a 9-meter sailing boat with no engine in September 1991 and a crazy autumn sail from Varna to Malta then Gibraltar and back to Malta, fate led me to my first paid position. Many years as Captain, Mate and Engineer in the super yacht industry followed, until eventually I returned to my country in 2003 and setup up a yacht services company. Running a business never stopped me from actively sailing though: delivery trips, charters, boat ownership. For the past 2 years I’ve gone back to racing on my last boat Espresso Martini.

For me, sailing has long become a way of life. I could easily say that everything I am as a person I owe to sailing. Sailing is freedom and immense pleasure but also a permanent challenge to strive for perfection. No one knows it all – we are all constantly learning. Despite all that technology at our fingertips in present days, Nature easily shows us now and again just how much larger it is. Hard work, self-improvement, respect to the Ocean and respect to people, and not taking yourself too seriously – perhaps these are the most important lessons I have learned so far. Well, learning never stops, does it?

Quite frankly, single-handed racing goes against my grain as a professional mariner. Not being able to have a 24-hour 360-degree watch goes against all standard maritime rules. But… What a challenge this is! I do consider successful long-distance single-handed sailing to be one of human beings’ top personal endeavours and achievements: right up there with space exploration and fighter-jet piloting. Not having done much single-handed sailing myself, the very idea opens a new door and calls for a serious effort on my part to reach a satisfactory level of confidence in my own skills, knowledge, physical and mental strength to line up for the start and, Neptune permitting, cross the finish line.

Complacency and going with the tide is not my idea of living. Responding to the brilliant idea of giving similar-minded sailors who, for one reason or another, are not among the lucky few to professionally sail boats that are the product of millions-dollar campaigns, an opportunity to sail non-stop solo around the world, is probably the most natural action of a life-time sailor.

Preparation is already under way. My boat is designed for offshore racing by the ingenuous Bruce Farr but “offshore” doesn’t mean “ocean”. Most of the structural reinforcements have been already done by myself and my staff. The list is long, as it should be, for such an event. Additional watertight bulkheads, exchanging the full-beam wheel for a tiller, switching to a lazy-bag for the main and furlers for the headsails and adding additional stays and backstays, partial cover of the open cockpit are some of the most important items. I plan to go one step at a time since pondering over the full list can be a bit overwhelming.

The biggest challenge is definitely the preparation of the boat. Of course, the route itself is definitely not something to be underestimated in any way. On a personal level, the biggest challenge will be somehow combining the current full-crew racing program and the demands of running my business with the preparation of the boat for single-handed sailing.

My boat is a Kevlar composite Farr 45 design, built in 1997 by Carrol Marine in the US. The boat was damaged following a severe storm in North Wales in 2017 which destroyed Holyhead Marina and a huge number of boats there. Espresso Martini and I had a case of a love affair from the moment I saw an ad of her published by a salvage company. After a makeshift repair in Pwllheli, myself with a crew of 2 more seasoned sailors delivered the boat to Bulgaria in October/November 2018. Despite having partially delaminated sections on her port-side, the boat handled the rough conditions of the Bay of Biscay and a deep depression in the Mediterranean with winds exceeding 60 knots incredibly well. Following a complex and difficult refit the boat was launched in May 2019 and was immediately involved in the ambitious program of the Cor Caroli Sailing Academy. We have sailed the boat exclusively with amateur crew aboard, most of them having just learned to sail. It was the same novice crew who did the record-time crossing of the Black Sea in November 2019. Following many local, Romanian and Turkish regattas, the plans for 2021 include the Aegean 600 race and the Rolex Middle Sea race.

I surely do – I’m still in the process of working through the many possibilities. My country has its many issues and I would like to take my time in finding the best cause to link to my participation.

I am really grateful for the opportunity and looking forward to the event development.

Best of luck to all participants! 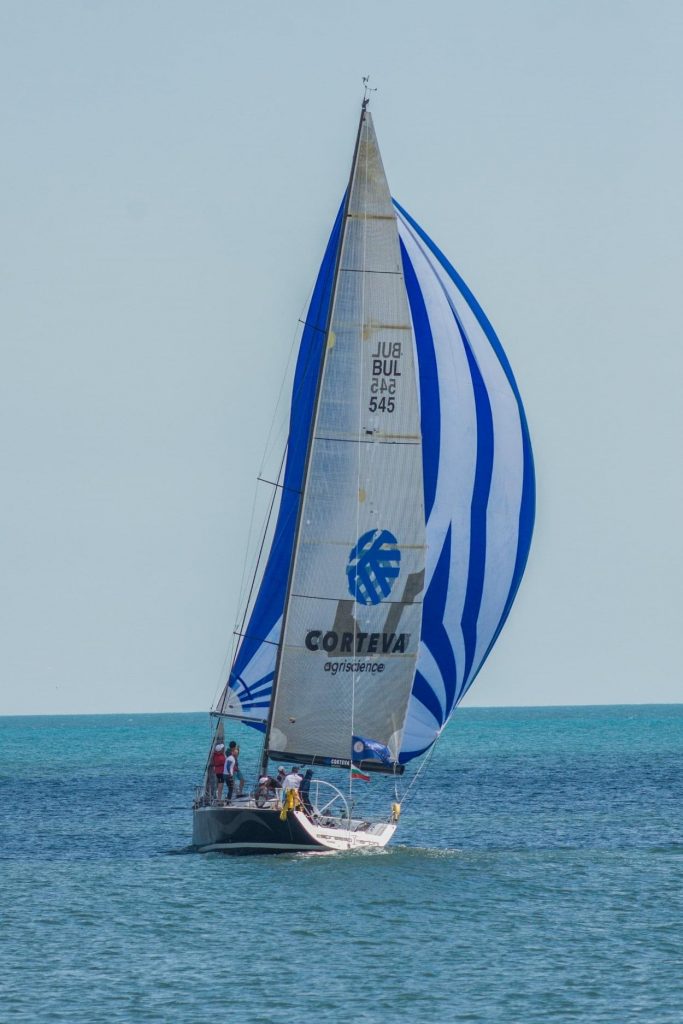